I know it seems to some that this appears to be a form of whiplash But try and keep in mind that I was not the one telling everybody that the event for Sunday February 7th is a miss or out to sea. So you may have me confused with some of the local TV Mets in the Middle Atlantic region but I have never said that so try and keep that in mind.

As I said before the key to this event is the amount of cold air that comes in on Saturday and the actual track of the Southern LOW     This event appears to be a fast-moving Miller A  type of East Coast winter storm. That is to say, low pressure from the Gulf of Mexico that comes up the Southeast coast moves off the coast somewhere along North Carolina or Southeast Virginia and passes off of Southeast New England.  The other thing about this event is that it’s pretty quick. It’s an 8 or 12 hour event not a long duration system like the last one.

BUT   DT   “ THEY “  SAYS IT IS GOING TO BE 50 DEGREES SUNDAY!!   ( in eastern va )
No it’s not.  The problem here is that you ‘are using flawed reasoning.  (A lot of people in this country need a  good deal of training in critical thinking because some of you have no critical thinking skills at all.)

You see some of the weather models don’t have anything for Sunday. That was especially true yesterday. They showed sunshine or partly cloudy skies and temperatures around 50 degrees.  But you can’t use  THAT temperature forecast and apply  it to a situation where it is overcast with a Northeast wind and there is rain and snow falling. The 50-degree temperature forecast is based upon no precipitation and at least partly sunny or sunny skies. If this event does happen as these  6z weather models are showing then clearly it  is not going to be partly sunny and with overcast skies and precipitation falling;  it’  is not going to be 50 degrees in southeast Virginia or Northeast North Carolina


For Southeast Virginia and Northeast  North Carolina, the key to this event is not only the track of the LOW ut the timing. Because  the event begins in the pre-dawn hours of Sunday… that is when temperatures are the coldest both at the surface temperatures and the dew points. That means that when the precipitation starts your wet-bulb   — your saturation point between the temperature and the dew point –is at around 32° . So as long as the precipitation is falling moderately you get snow not rain.

But again for the Southeast third of  Virginia /   Northeast North Carolina as well as the Delmarva, the track here is really important. The model data for 6z  GFS the GFS Ensemble and the European and European Ensemble is perfect for these areas. This is the most optimal or best possible outcome for snow in these areas with this particular situation. If the LOW tracks are closer to the coast then it would force the warm air closer Inland and Northeast North Carolina and Southeast third of Virginia and the southern Delmarva would go over to rain by 10 or 11 a.m. on Sunday.  There would still be snow in these areas early Sunday morning and maybe even a few inches but it would go over to rain if the low Track closer to the coast.   It may not but it could.

In central interior Virginia …Northwest North Carolina …Maryland DC Baltimore… northern Delaware … Southeast Pennsylvania ….New Jersey NYC  into eastern New England this looks to be an ideal moderate snowstorm. Nothing too severe– just a nice snowfall dropping anywhere from 2 to as much as 8 inches depending on location and timing.

For the Central Virginia / Richmond metro area which is always on the borderline between snow and rain….  because the event begins before dawn on Sunday it’  starts as snow and since the precipitation appears to be fairly strong it stays snow all the way through the event until it comes to an end on Sunday early afternoon. IN Southwest Virginia up the Shenandoah Valley the  Virginia  Piedmont …northern Virginia DC Baltimore …central Maryland it is all snow with the snow amounts decreasing the further West you are.

Finally last point  —  this is a fluid situation and it could change again.  Sometimes the atmosphere is right on the edge like it is now. Slight deviations one way or the other could have huge implications for the rain-snow line …the amount of precipitation….the amount of snow and what actually happens.   Do not think that this post here on Thursday is the final word about this event. If you think that you only have yourself to blame when the forecast changes and you’re not prepared. 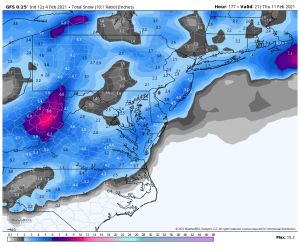 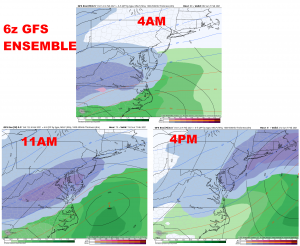 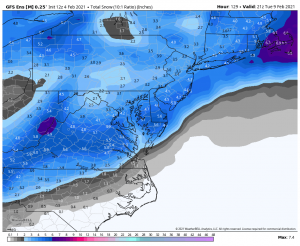 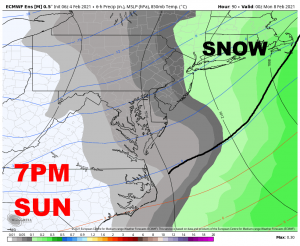