As I h      ave stated in other locations such as the WxRisk.com YouTube channel …on my Twitter page and on the Facebook page… I continue to see December as being colder than normal and snowier the normal in the eastern half of the CONUS.   Of course there are many different ways something like this can manifest itself.  It could be just one or two big winter storms or it could be a series of small or moderate winter  systems. But I really do think the potential is there for the   coldest and snowiest December  in more than a decade


These next  set of  images show why I am fairly bullish about December with respect to early-season winter storms in one or more of the following regions: the Ohio Valley, the Middle Atlantic, the Great Lakes, and  New England.

This first map shows the extended European and GFS ensembles with a specific focus on  December 7th. I have drawn in a couple of features in order to aid in the understanding of what these maps are showing.  (The zigzag line represents Ridges at 500mb  while the thick black line represents the mean trough access)

The extended European weekly model as of November 21 shows an extremely strong Blocking pattern in Greenland known as the – NAO  which also shows up on the extended GFS model as well. The European has a bit more Ridging on the West coast than the GFS does. Interestingly, both models seem to show a negatively tilted Trough axis running from the Great Lakes to Georgia or from Wisconsin to Alabama. This is a fairly strong signal that there could be some kind of moderate size LOW pressure area coming through the Ohio /Tennessee Valleys  sometime around December 7th. Interestingly the 850mb  temperatures appear to be cold enough to support winter type precipitation in much of the area.   Of course it needs to be kept in mind this is somewhat speculative but I do think it is important that the models here are in pretty good agreement with the overall pattern given that we are talking about  December 7th.

This  next image shows again a comparison between the European weekly and the GFS extended weekly model valid as of December 11. Both models show a strong signal for a  negative NAO In Greenland and both models show either neutral or slightly negatively tilted Trough axis east of the Mississippi River but just to the west of the Appalachian Mountains. The European again has a somewhat stronger Ridge on the West coast  than the GFS but clearly there is some kind of moderate size LOW  pressure moving through either the Ohio Tennessee Valley sometime around December 10 -11-12

This next image again shows a comparison between the European weekly and the GFS extended Wiki model valid as of December 14 . And once again the model agreement here is pretty damn good with the GFS finally showing a moderate-sized Ridge in British Columbia into the Gulf of Alaska. Given the position of the Trough axis across the Mississippi River Valley,  this is a fairly strong signal for something to watch out for in the middle of December

Next we will take a look at the different teleconnection matrixes  on the Atlantic and the Pacific side. This image shows the 12z  11//21 European ensemble  for the  AO  (Arctic Oscillation)  and the NAO   through December 7th..  Some of the  individual members  show a moderately strong negative but some members show positive as well . So I see the 12z EPS 11/21  run with no clear signal regarding the AO. But that is not the case with the EPS  and how it is trending with the NAO.  Here there is a clear bias towards a moderately negativeNAO  pattern developing by December 1st and continuing through the first week . 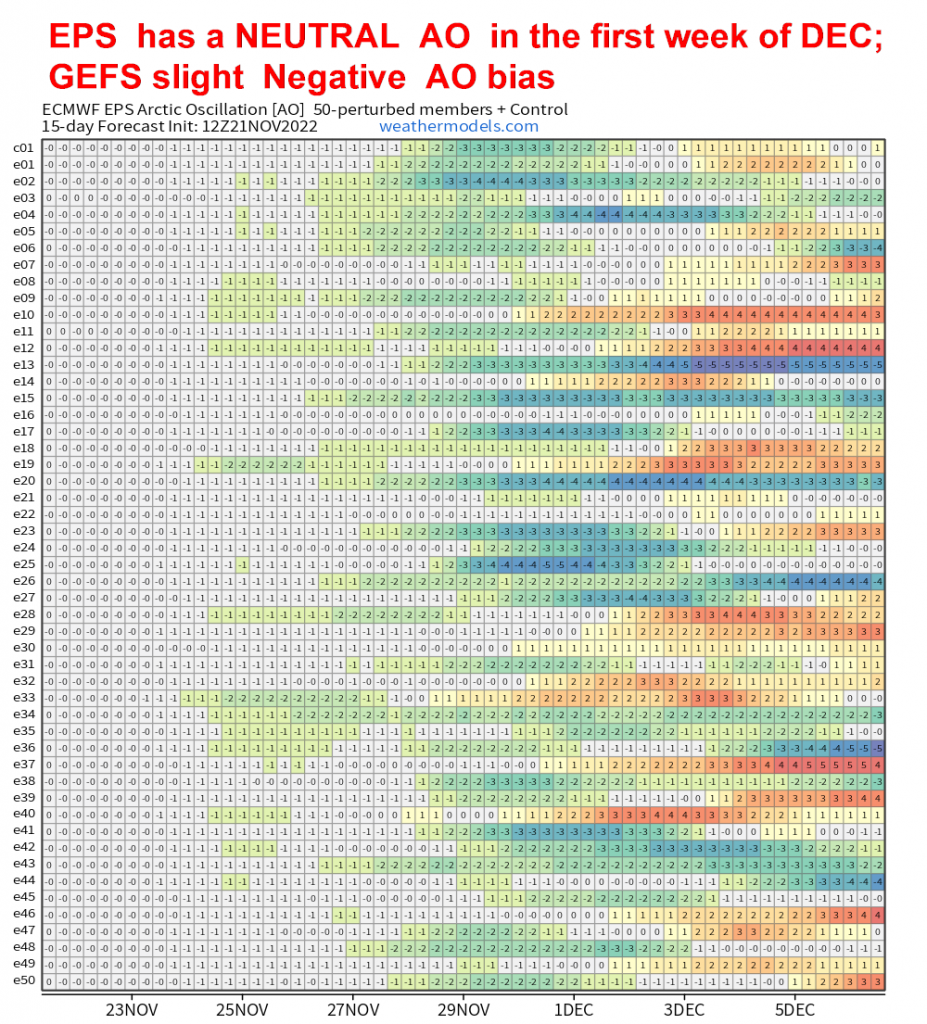 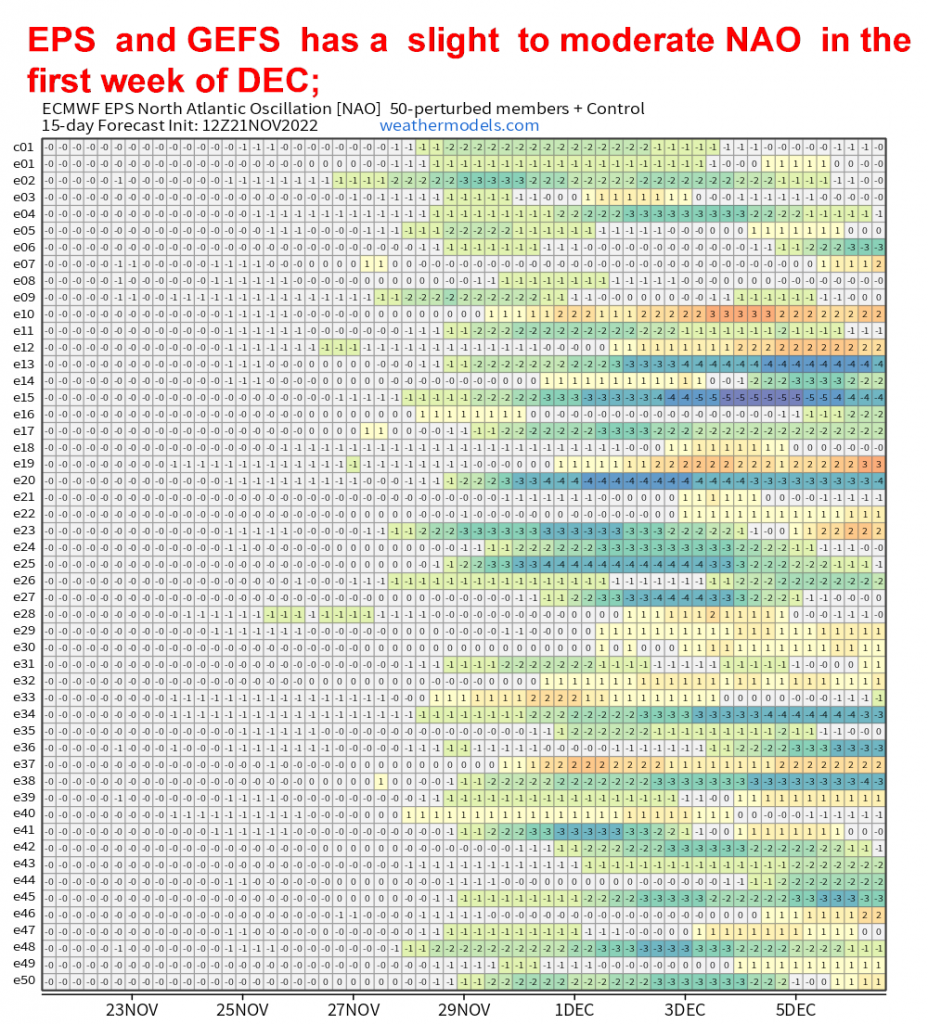 Meanwhile on the Pacific teleconnections across North America, the 12z 11//21  EPS Is strongly negative from November 27th right through until the first week of December. This implies a constant stream of energy coming in from the Pacific Ocean which will make for a very active pattern but not in a particularly cold one  east of the Rockies. It is of course very good news for the droughts in areas in the western third of the  CONUS. 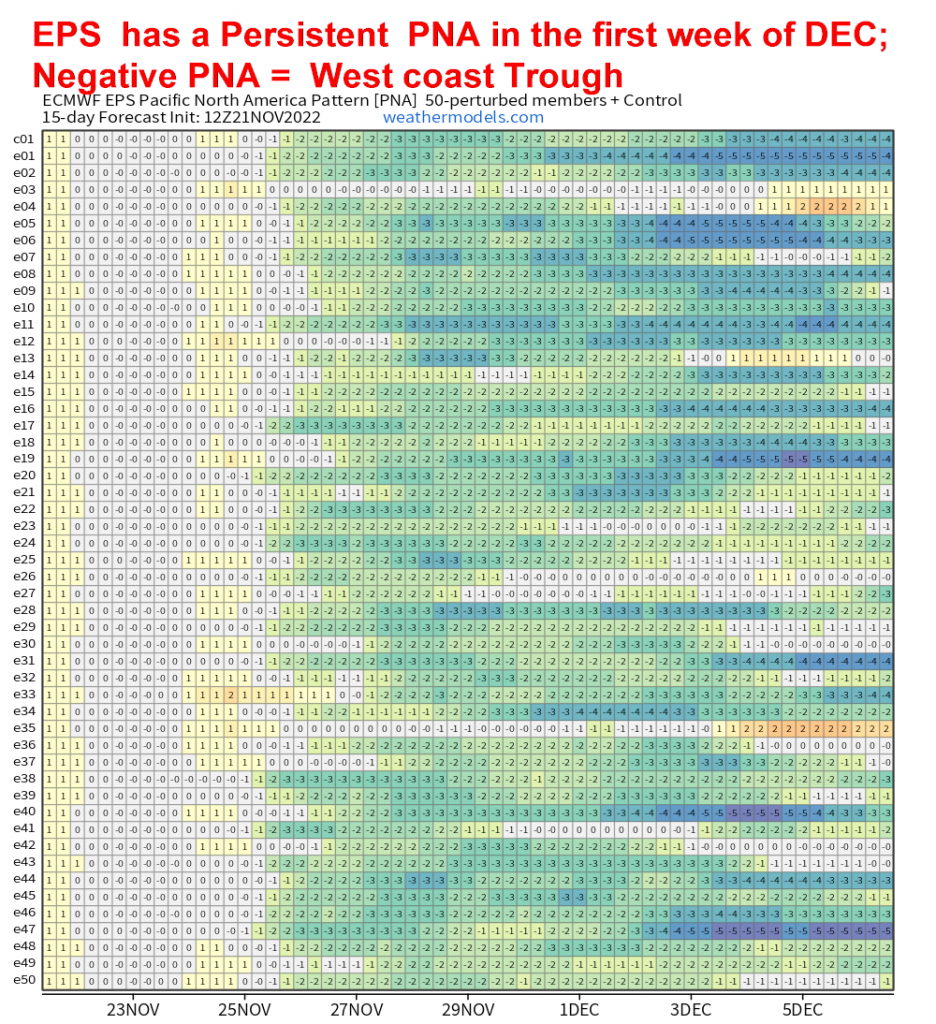 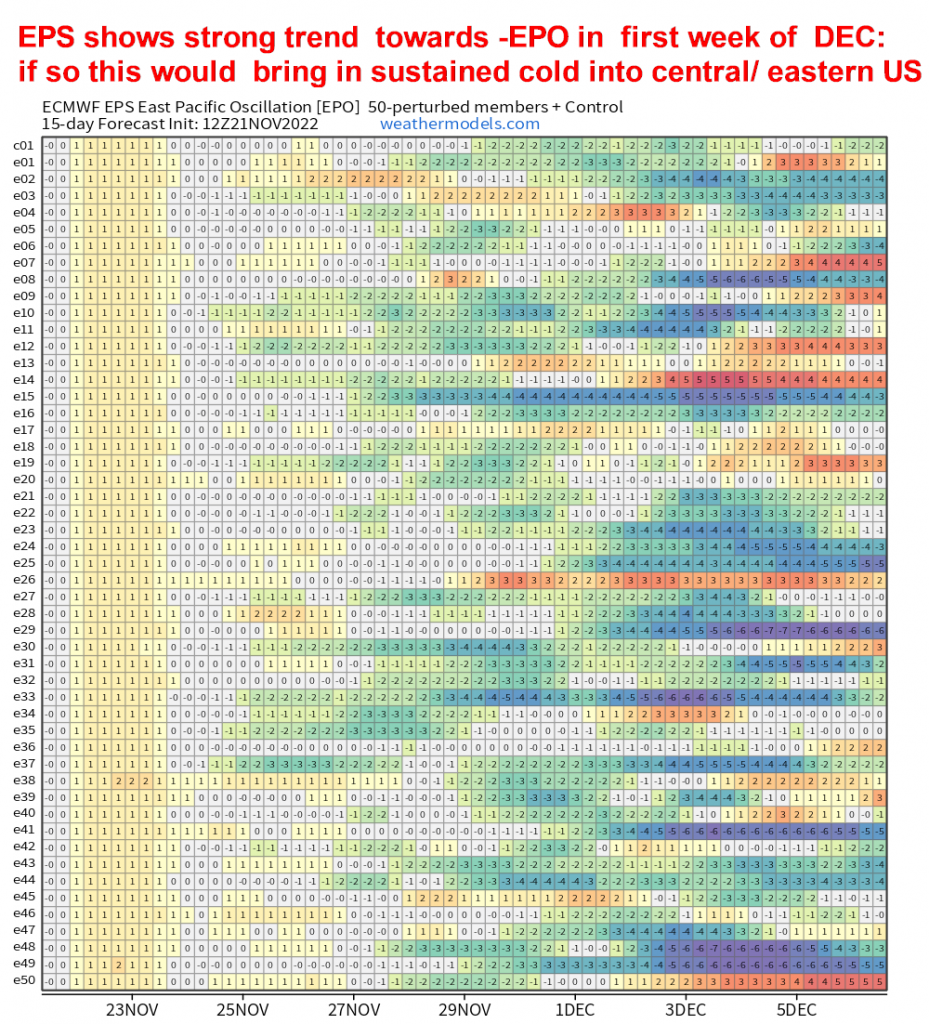 Finally, here is the  EPS for the Eastern Pacific Oscillation/ EPO. Keep in mind that a strong negative EPO  will always bring about a significant cold air outbreak in the central and eastern CONUS.  Indeed, that is exactly why we saw such a significant early Arctic air outbreak during the past seven days across the central and eastern portions of the country. The EPO  set a record low value in November and the result was an extremely  cold air outbreak relative to normal.  Here the EPS  is clearly showing another significant sustained  -EPO  pattern developing after November 30th. If this is correct it would allow for a new cold air ou break to enter the central and eastern portions of the country while the Pacific Energy is sending in additional   impulses of energy and low pressure areas across the country.

The combination of a new cold air outbreak during the first week of December along with the increasing energy coming in for the Pacific could very easily set the stage for potentially snowy and cold December.