There have been some significant changes with regard to the track with hurricane IAN during the last 12 hours. More and more of the hurricane models are now clearly showing what the European, British, and German models have been showing for the past 2 days – a much sharper turn it to the northeast which will begin in the next 24 hours. This means IAN will make a landfall either at Tampa / Sarasota or between Sarasota and Fort Myers. The idea of hurricane IAN striking the Big Bend area of Florida, or the Florida Panhandle is now off the table.

Hurricane IAN turned north several hours earlier than forecasted by some of the hurricane and global models.  The movement of Ian across the western tip of Cuba means that Ian will not into the Yucatan Channel. This means that all / of the other previous hurricane models and global models such as the GFS or the Canadian which on Saturday and Sunday were taking Ian into the Yucatan Channel and then up towards the Florida Panhandle, are not going to be correct. Indeed, it looks like the last several runs of the European British and German model are going to be correct.

The latest reconnaissance is showing a mean sea-level pressure of 960 millibars which is a borderline threshold between category 2 and Category 3 Hurricane.  IAN did not show any real significant weakening as it crossed the western tip of Cuba.

This image shows the latest shift in the hurricane models 6z to 12z, and the trend is quite profound and obvious. There has been a significant shift in the track of IAN. Most of the models are now taking the system with a direct hit in Tampa or just to the South perhaps as far south as Sarasota or Fort Myers As a category 2 hurricane. However, at that point the data seems to be indicating that IAN is going to stall either on the west-central Florida coast or just inland for over 24 hours. This is very similar to what we saw with the disastrous hurricanes of Harvey and Ivan a few years ago. 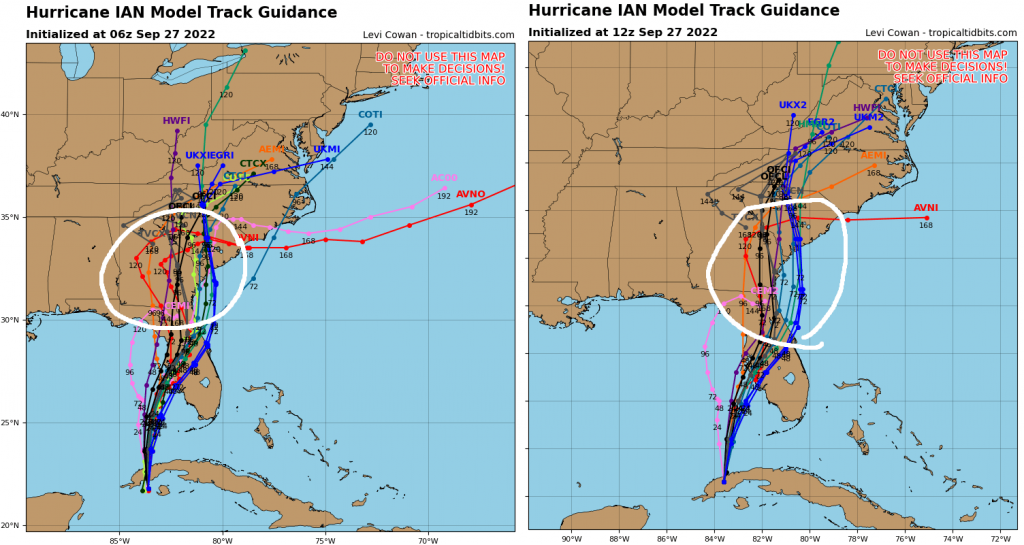 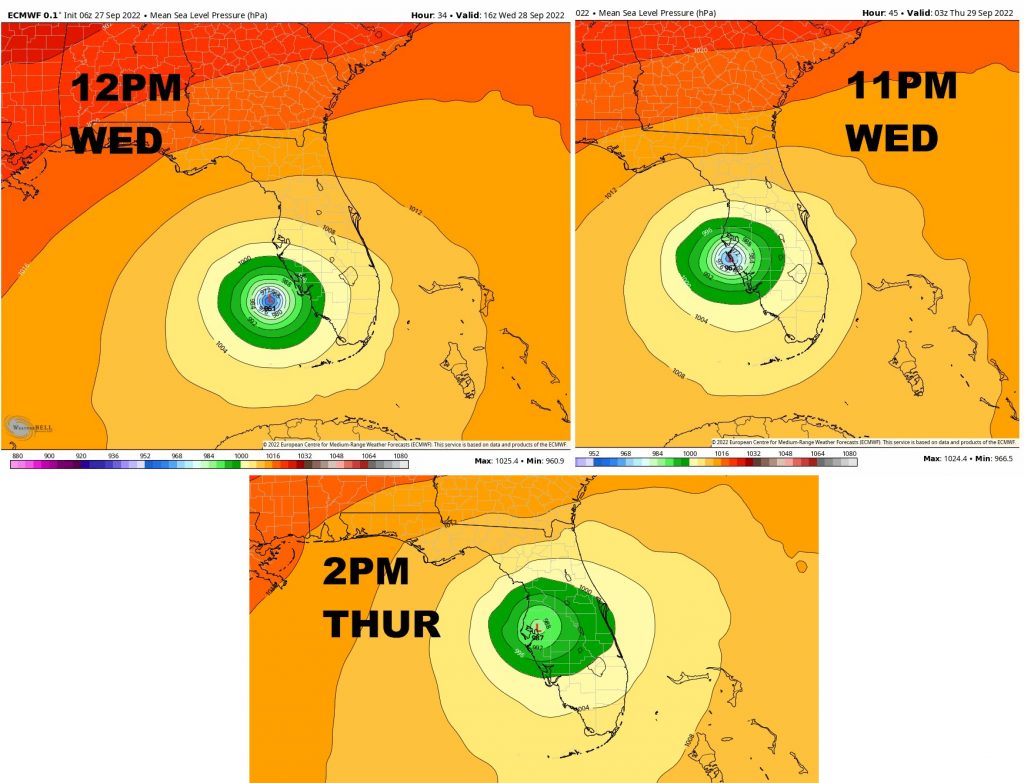 Of course, IAN is not nearly as strong as Harvey or Ivan but the principal and the idea seems to be the same sort of thing. The steering current clearly breaks down as the hurricane approaches the west – central Florida coast. The operational GFS at 6z has\ winds between 65 and 85 mph for more than 24 hours along the west central Florida coast. In addition, the GFS and the European models are showing rainfall amounts up to 20 inches in and around the Tampa metro area into central Florida. This massive excessive amount of rain always means catastrophic flooding because these models show IAN stalling either in west -central Florida or on the west Central Florida coast. 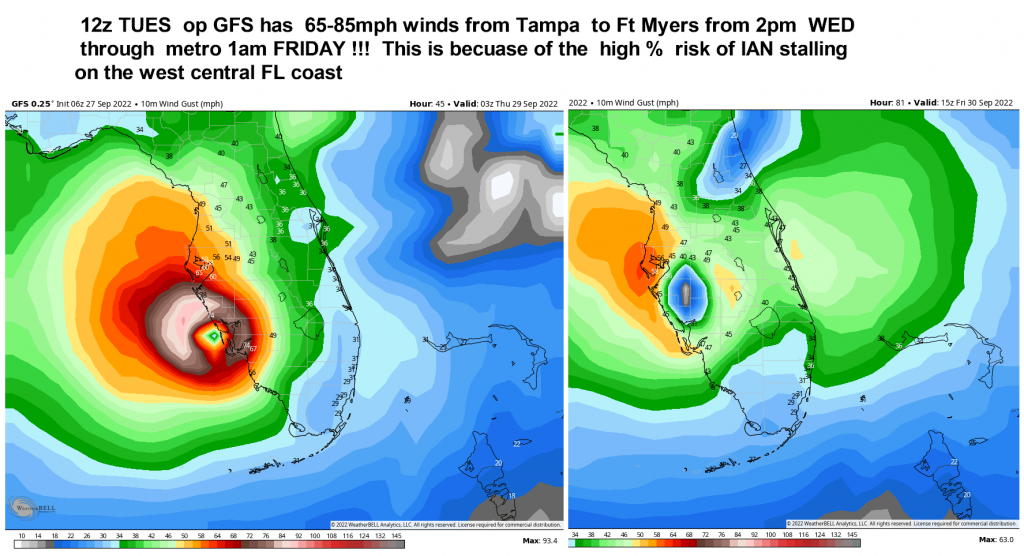 Even if IAN does stall either on the west -central Florida coast (Tampa or Sarasota or Fort Myers) it will of course eventually weaken as it pulls in somewhat drier air from the Florida peninsula. But the air mass here is fairly moist/ tropical, and the effects of land friction will also be at a minimum across the flat areas of the Florida peninsula, so the weakening will be slow.

The other new trend here has to do with what happens once IAN begins to start moving on Friday. The British and the German models are taking IAN east across central Florida where it emerges near Daytona Beach on the Atlantic side of the Florida Peninsula. From there, these models turn IAN north as it moves through the Gulf Stream making another landfall near Charleston South Carolina. If this track is correct, it is possible that IAN could regenerate and reach minimal hurricane criteria with another landfall in Charleston South Carolina this weekend.

The Eastward shift in the model, especially the hurricane models as well as the European, British, and German models, also change the amount of rainfall which is going to fall in Alabama, eastern Tennessee, and Kentucky. Up until now, most of the models have been taking IAN due north into Georgia then into eastern Tennessee and either into southeast Kentucky or southwest Virginia.  But if this new trend is correct and IAN’s tracks is further to the East, then IAN remains (as a strong LOW) will not go into the northern Georgia. Instead, Ian could move into the central portions of South Carolina and North Carolina. This would significantly reduce the threat of heaviest rains in eastern Tennessee and northern Georgia.

The rest of the forecast is unchanged. Whether Ian turns north over the Florida Peninsula or moves off the East coast of Florida and then turns north into the Carolinas, IAN as a LOW pressure area will drive significant rains into the Carolinas on Friday that will spread into southern Virginia Friday night or early Saturday morning.  Periods of moderate to heavy rain along with gusty winds, especially on the coast will be the rule this weekend throughout the Mid-Atlantic region as well as much of North Carolina eastern Tennessee, and southeast Kentucky.