There are several important changes to make to the forecast here so let’s get right to it and see what the heck is going on. 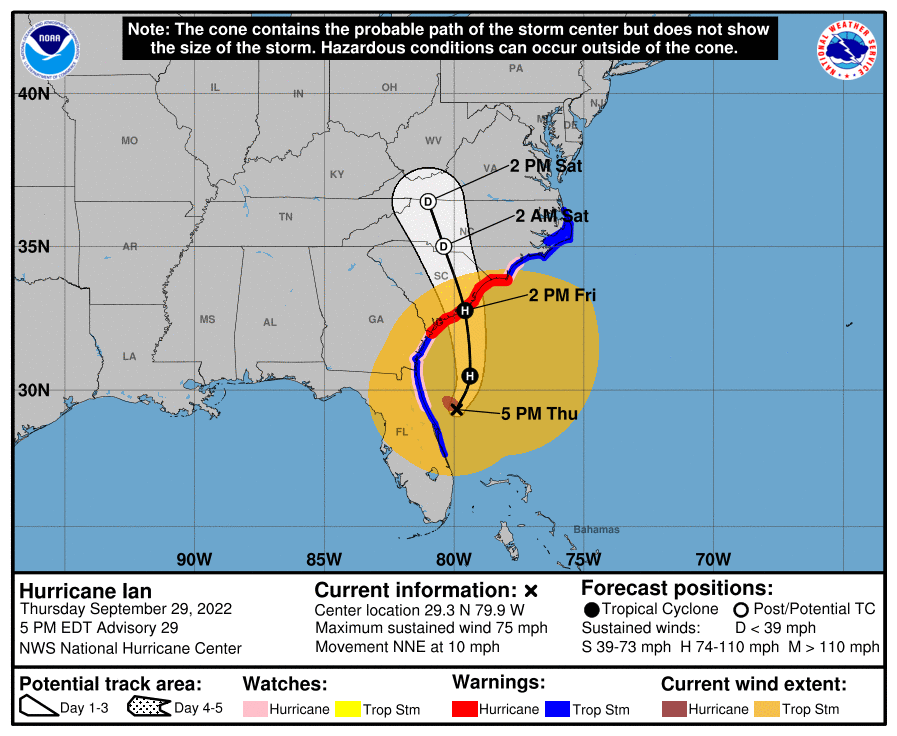 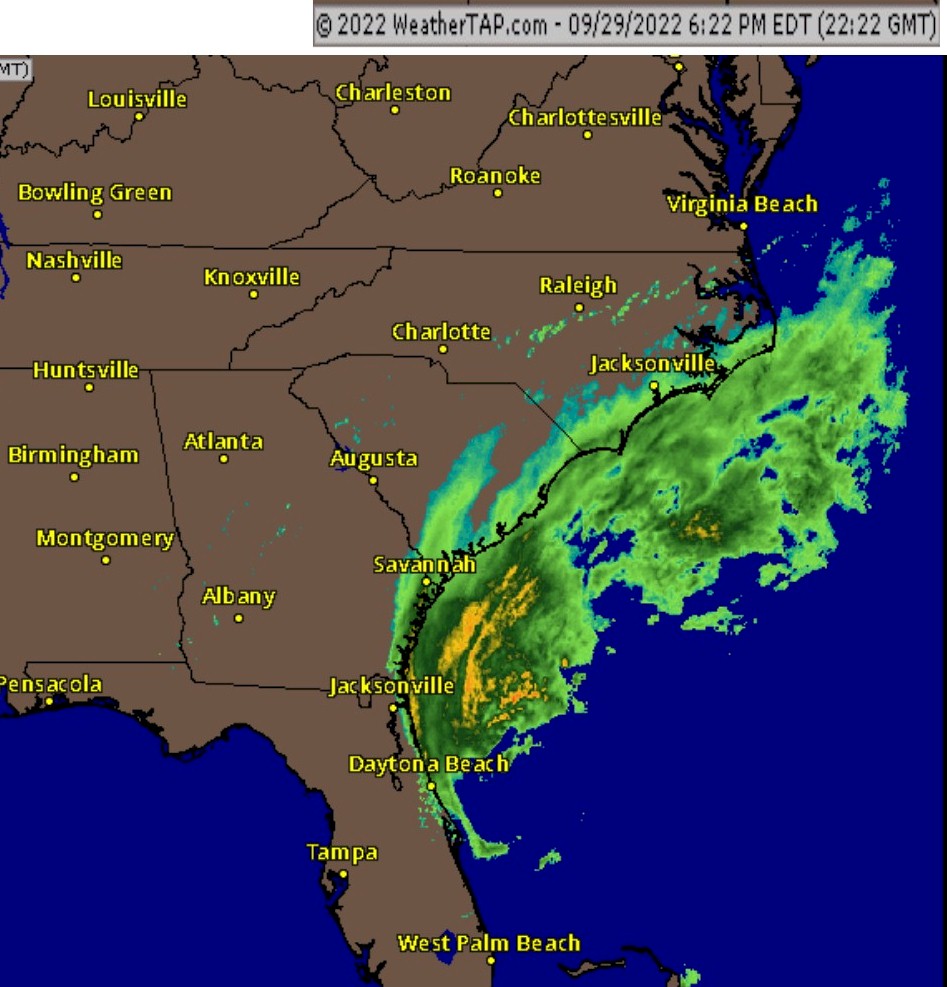 It is really important that you understand that IAN is not full tropical system. Not anymore.  This image shows the current  DEW  POINT  temperatures  across the Southeastern states and the Dew points.   ( DEW POINT = measure of how much moisture is in the atmosphere relative to the temperature)  we see the dew points are only in the 40s in most of Georgia and all of the Carolinas away from the coast.  Remember that hurricanes has a very large atmospheric circulation and they pull in air masses from all different directions which get entrained into the center. This means that the cooler dryer air, which is always hostile for tropical cyclones is getting pulled into the center of IAN. 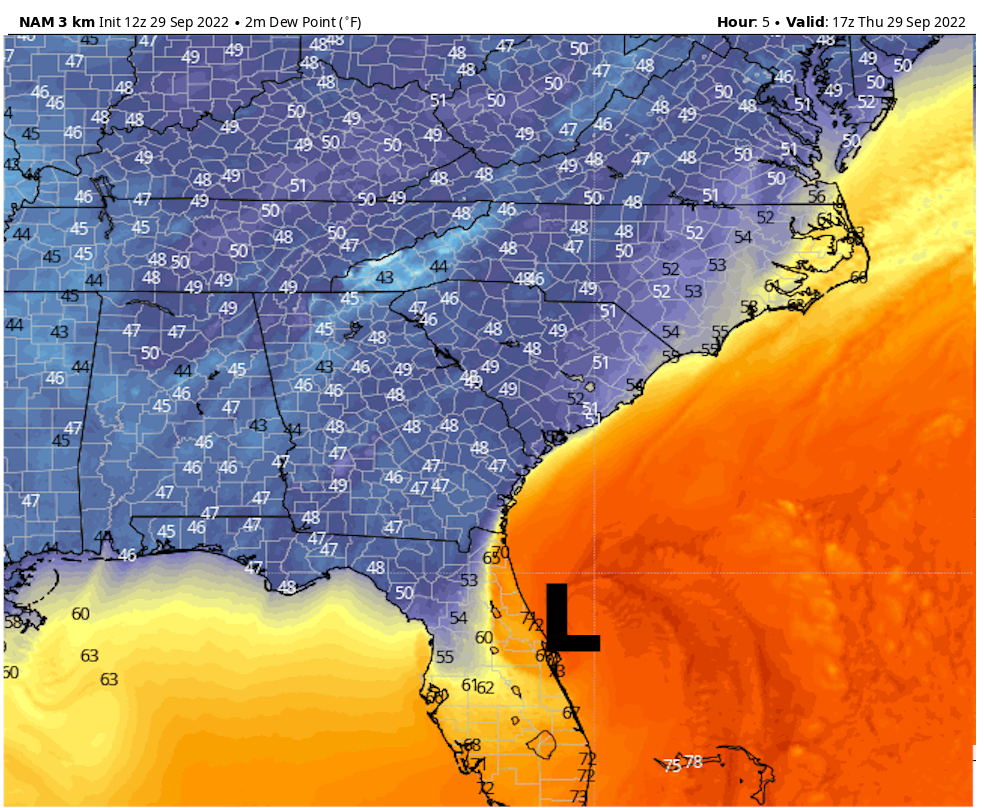 This image is the surface map valid at 4 pm and here you should really pay attention to the lines. These are called isobars. And the isobars represent the atmospheric pressure. Notice the enormous HIGH centered in Michigan and western New York state which is bringing New England, Pennsylvania, the Ohio Valley, and the Great Lakes as spectacular autumn day. But note the presence of hurricane IAN off the northeast Coast of Florida. Notice how the lines get compacted across Virginia, Kentucky, the Carolinas, Tennessee, Georgia, and Alabama. This is referred to in the weather business as pressure gradient. 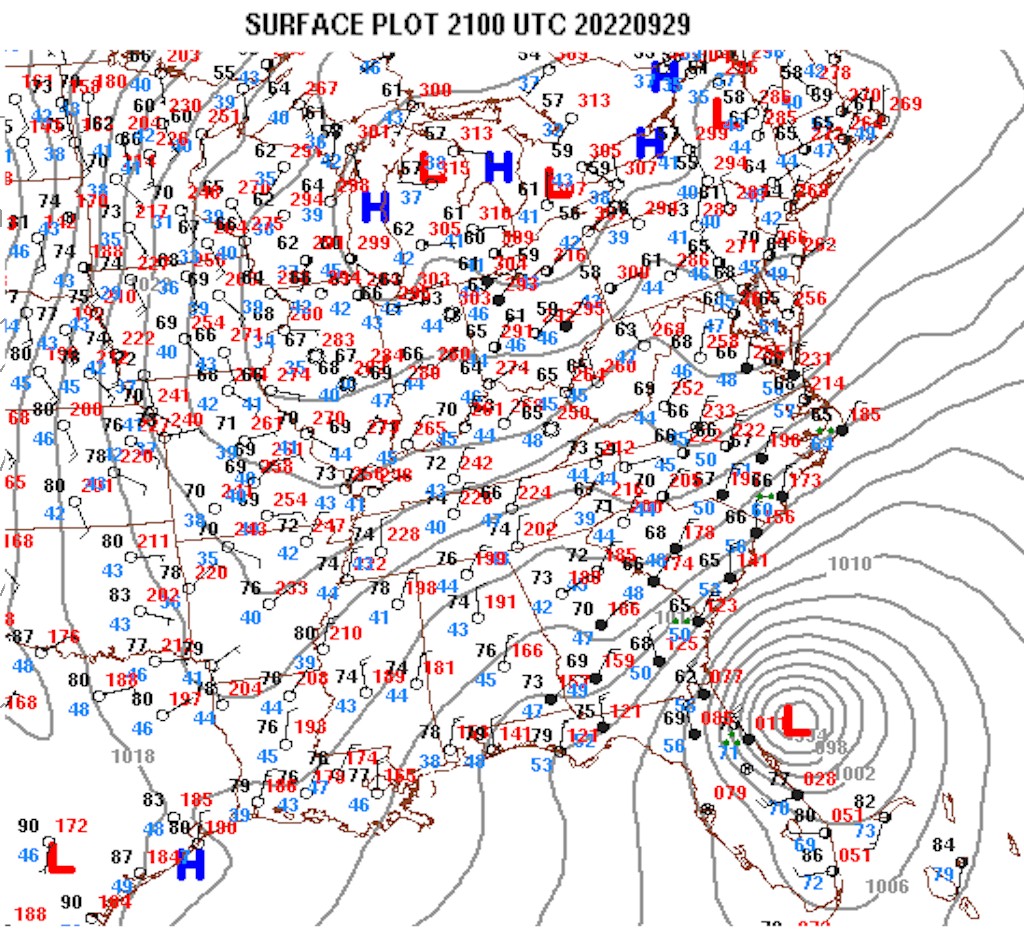 There are three different variables at work that must be taken into consideration in figuring out what is going to happen with the wind and the rains in the Carolinas, Virginia, Maryland, Delaware, West Virginia, eastern Kentucky, on Friday, Friday night. into Saturday morning.    They are the pressure gradient, category 1 hurricane IAN  Transforming  into a coastal LOW,  and the  Track.

Some of this enhanced wind field will spread into eastern Kentucky, West Virginia, Maryland, and Delaware, southern New Jersey, southern Pennsylvania during the day on Saturday but it will be somewhat diminished by then.

IAN comes ashore in central South Carolina between Charleston and Myrtle Beach.   This is assuming that the NHC’s track is correct, and that IAN will shift from a NNE direction to the N then NNW direction. Like I stated above there is a possibility this might not happen or if it does it happens much later. This would mean much more wind and rain and an increase in tornado threats for eastern North Carolina and the eastern half of Virginia on Friday and Friday night.

Assuming that does NOT happen …. the coastal areas of South Carolina can expect hurricane conditions developing towards dawn on Friday which will spread rapidly in land covering most of South Carolina and a good portion of eastern and central North Carolina — mainly east of Interstate 95 – during the day on Friday. The data shows large areas of the Carolinas seeing wind speeds anywhere from 55 to 80 mph with the strongest winds on the coast associated with the eye of IAN. 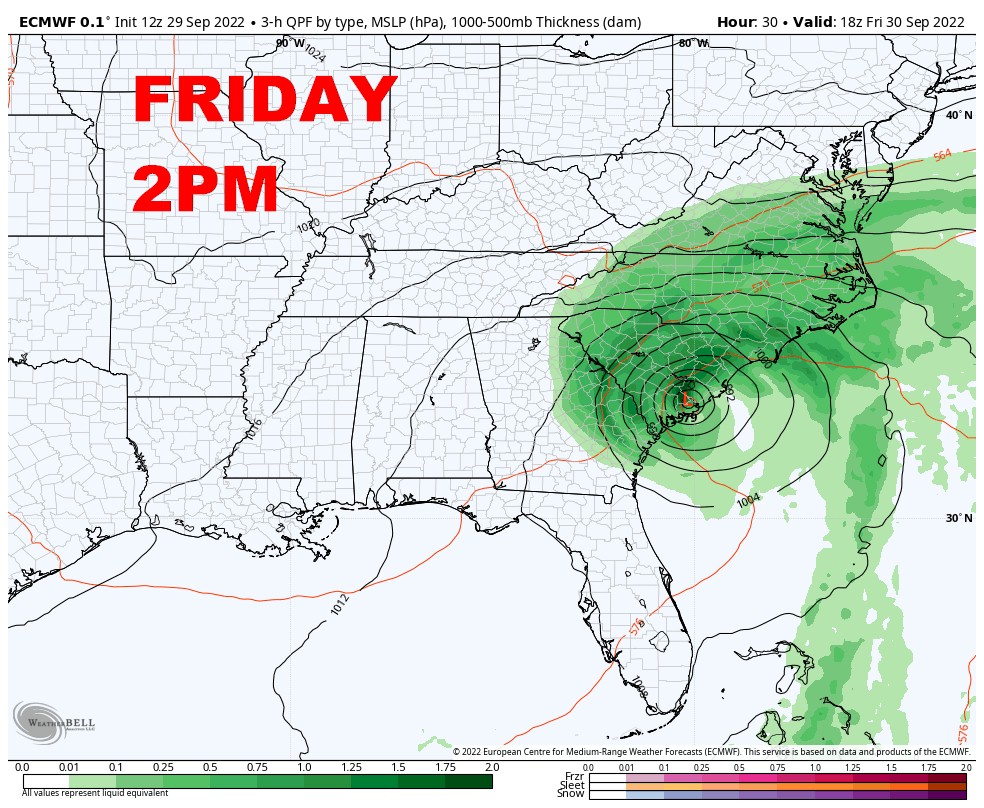 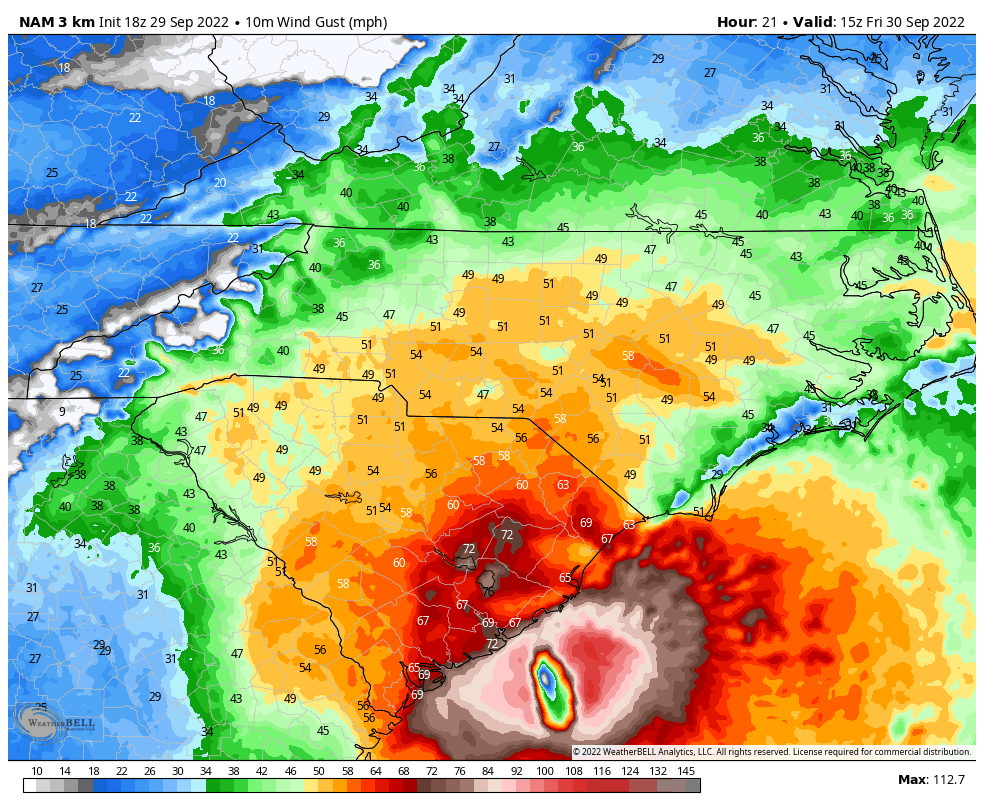 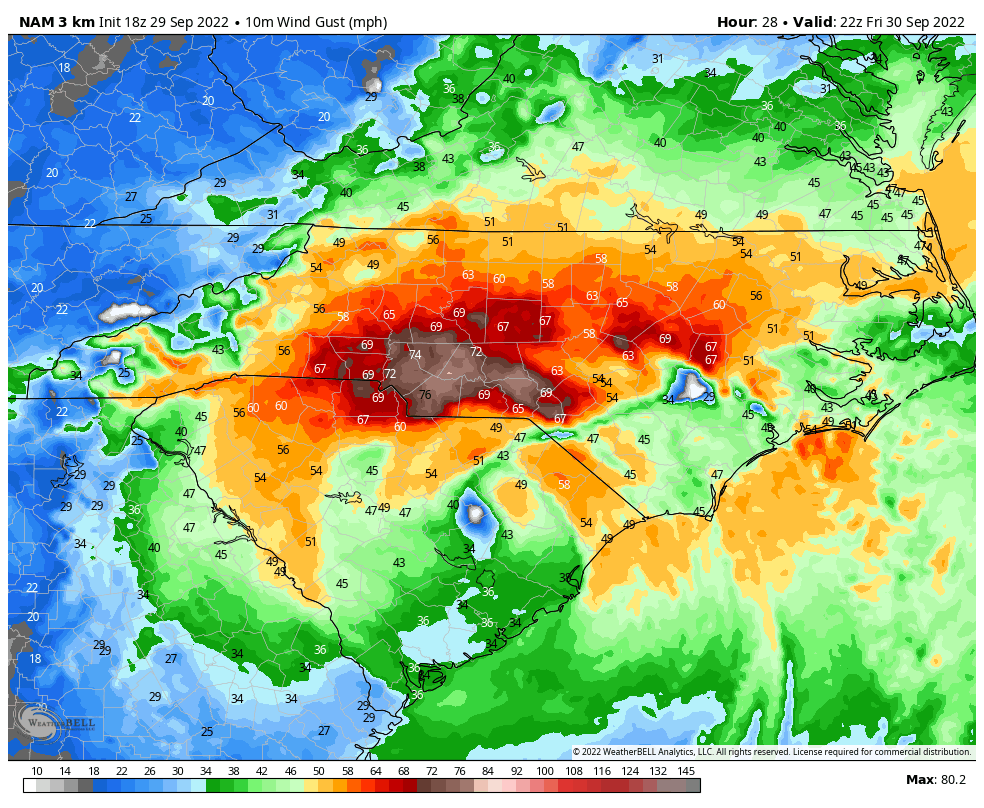 The tornado threat is significant but with IAN pulling in copious amounts of much cooler air along with substantially lower dew points, this might be one of the rare cases where we do not see a lot of tornadoes from IAN as it transforms from a hurricane into a coastal LOW.

Heavy rains and strong winds will push into the southern half of Virginia from Hampton Roads to the far southwest location such as Hillsville and Christiansburg. There will be numerous wind gusts over 40 mph in many of these locations Friday afternoon Friday evening into Saturday morning. 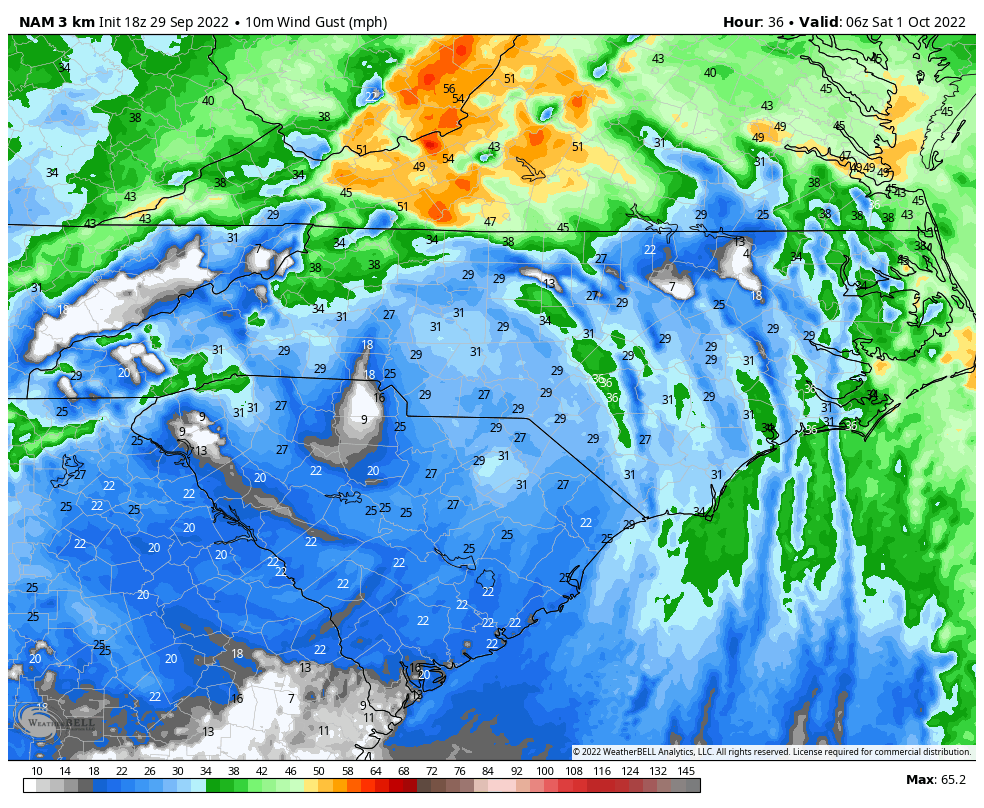 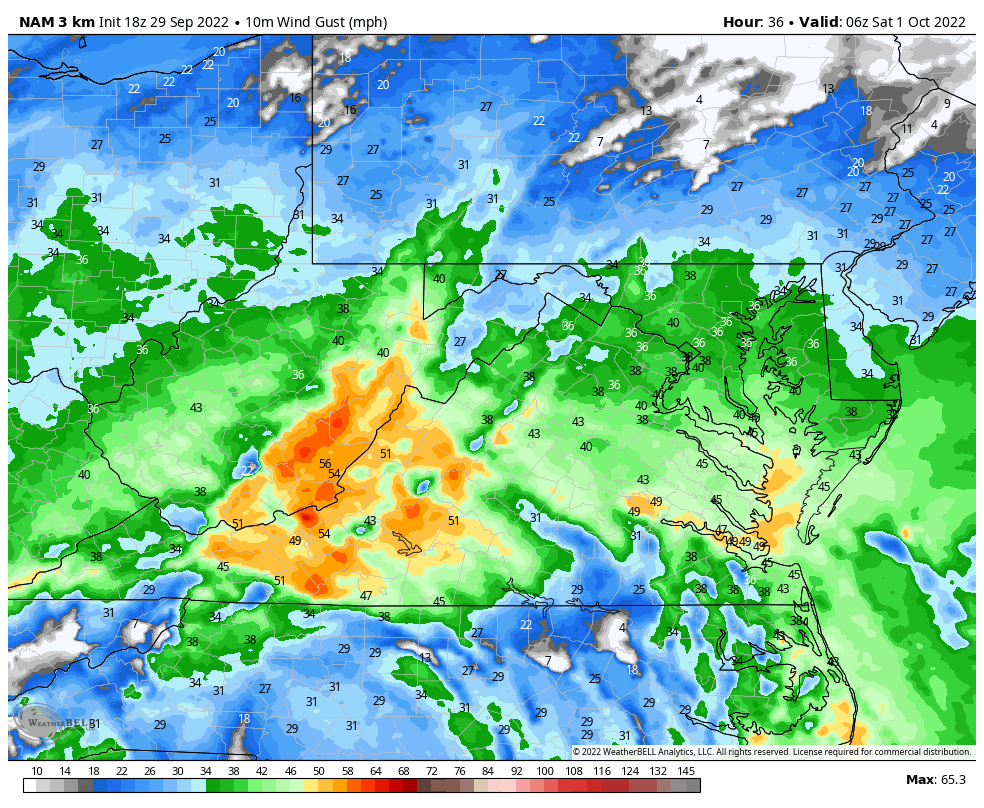 This image shows what the surface map is likely to look like early Saturday morning around 4-5 AM Notice that the event is now over in South Carolina and most North Carolina. Indeed, IAN at this point is now a pure coastal LOW and has lost all tropical characteristics. A dry slot in the rain shield has punched its way all the way into Southeast third of Virginia from Georgia. This is a classic signature of a coastal storm –not a tropical storm or hurricane. 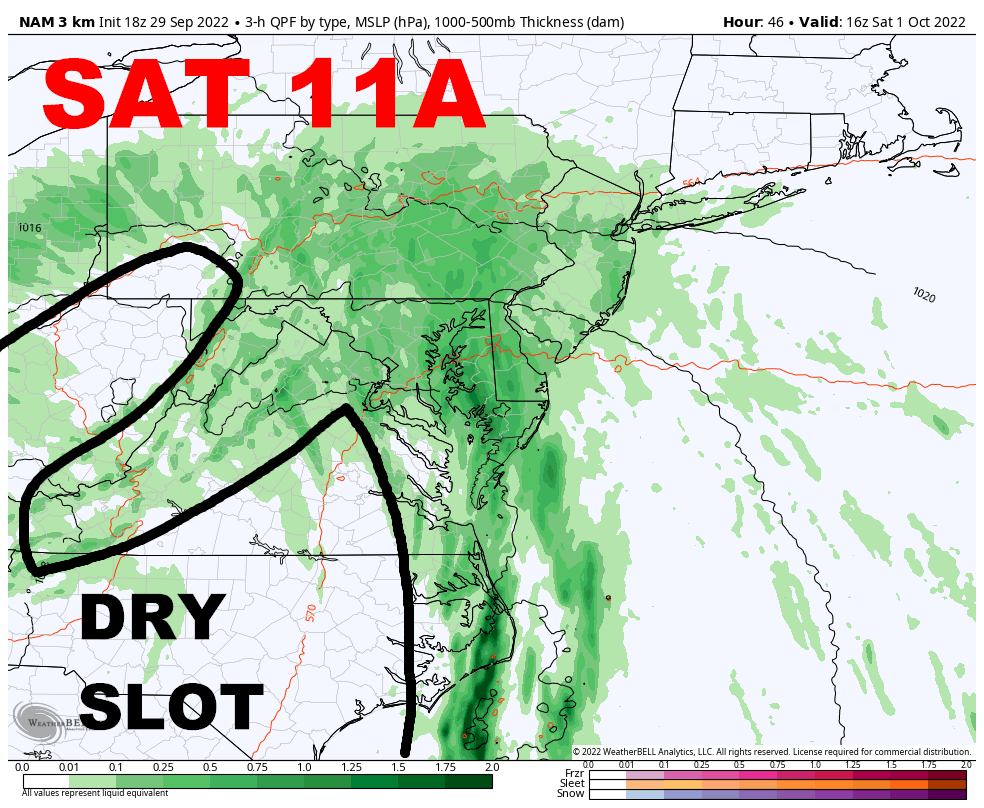 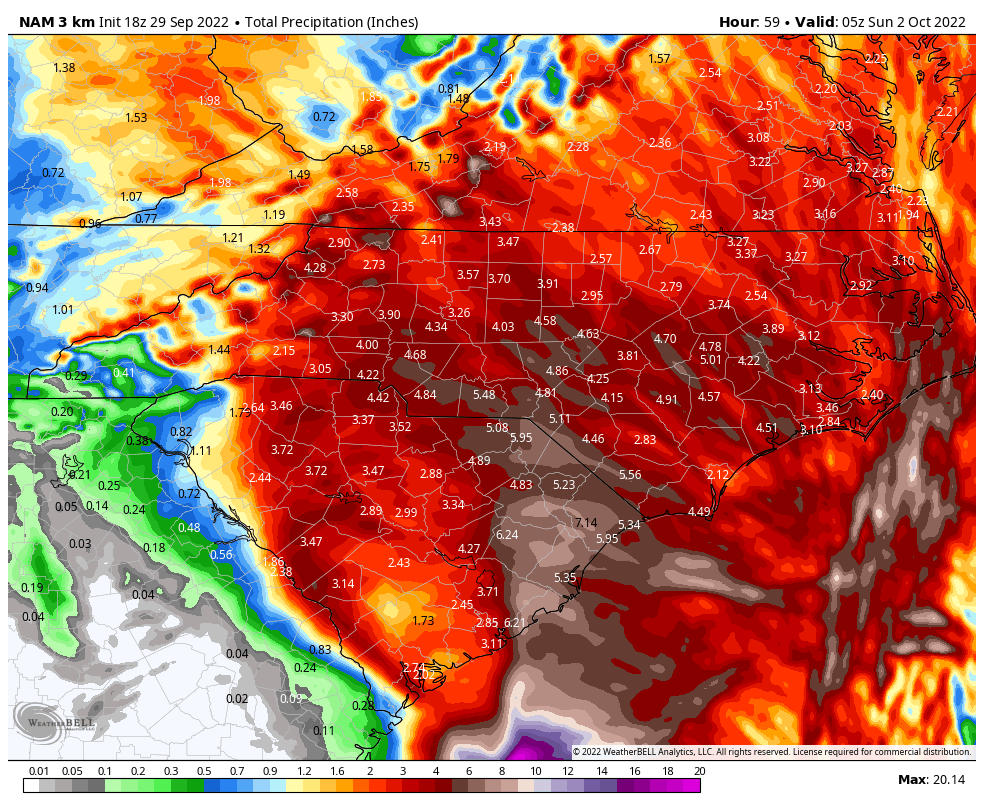 There will continue to be areas of light to moderate rain in the Shenandoah Valley, southwest Virginia, eastern Kentucky and the southern half of Virginia during the day on Saturday. The main LOW pressure area – which will be the remains of IAN – will be located in southwest Virginia or far southern portions of West Virginia. There WILL be a significant break in the rain with not much going on in central and eastern Virginia most of North Carolina, Maryland and Delaware during the day on Saturday. The strong winds will come to an end by dawn on Saturday. 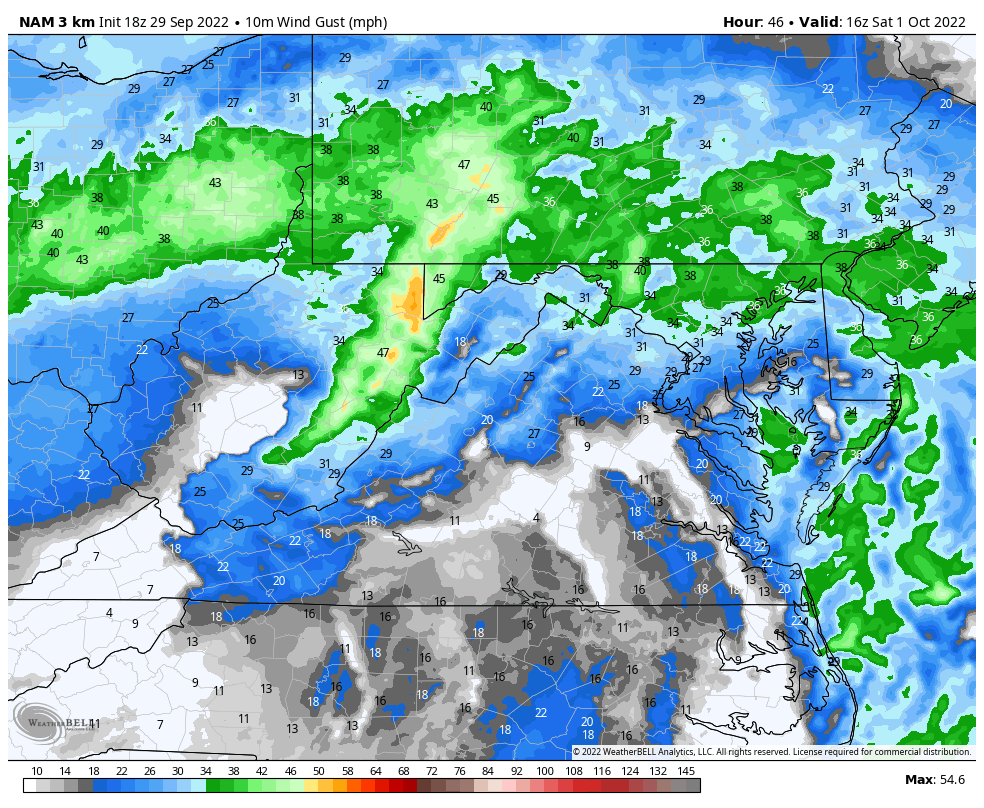 This means you can go out and do things if you need to get out and do stuff, there will not be any rain. There could even be a few breaks in the clouds with some weak sunshine in southeastern Virginia and the eastern half of North Carolina Saturday afternoon. Max temperatures in these areas will reach 75 to 80 degrees.  However in the areas that stay in the cloud cover and the rain… readings will stay in the 50s.

It is this third part that some TV meteorologists and forecasters are missing -or at least they are not emphasizing at this particular point. I hope as we get closer to the weekend, they begin to see what is going to happen Sunday, Sunday night, and Monday.

Starting Sunday morning, the main piece of energy in the jet stream and the surface LOW pressure area in southwest Virginia will begin to move slowly eastward. Light rain and showers move back into central, eastern, and northern Virginia, Maryland, and Delaware on Sunday morning. The rain coverage will pick up and increase in intensity and coverage during Sunday afternoon and evening covering all of Maryland, Delaware, Virginia, the eastern half of West Virginia and the far northern counties of North Carolina Wind speeds will increase once again to 15 to 25 MPH with higher gusts developing during the evening hours Especially along the coast in the bay. 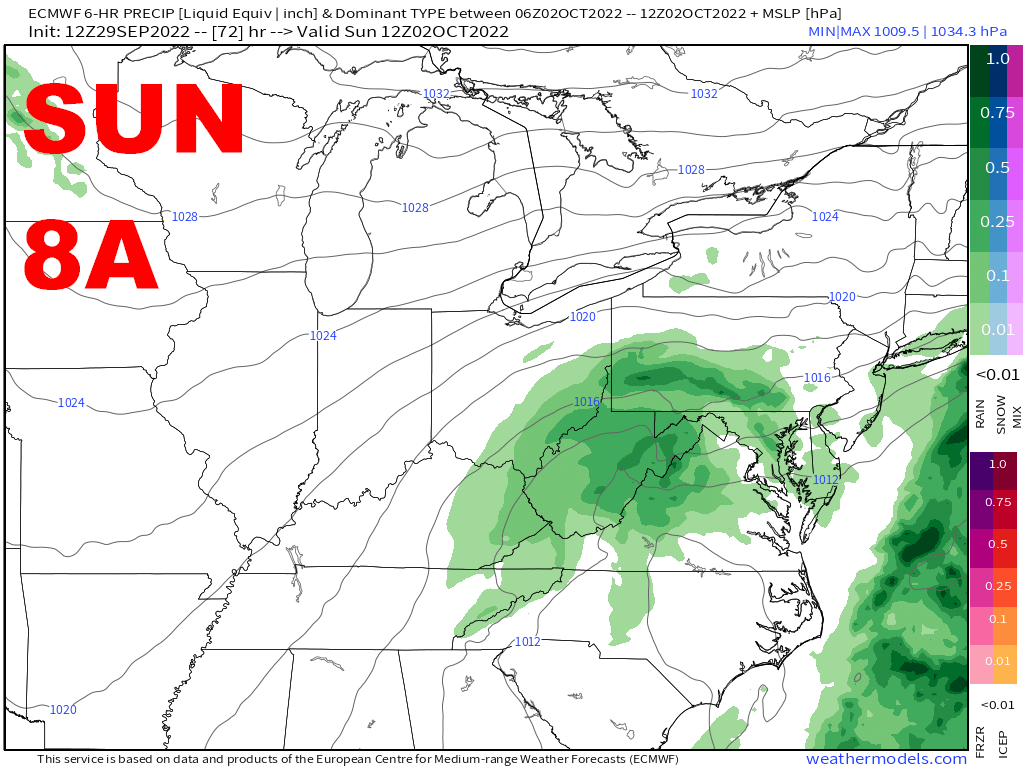 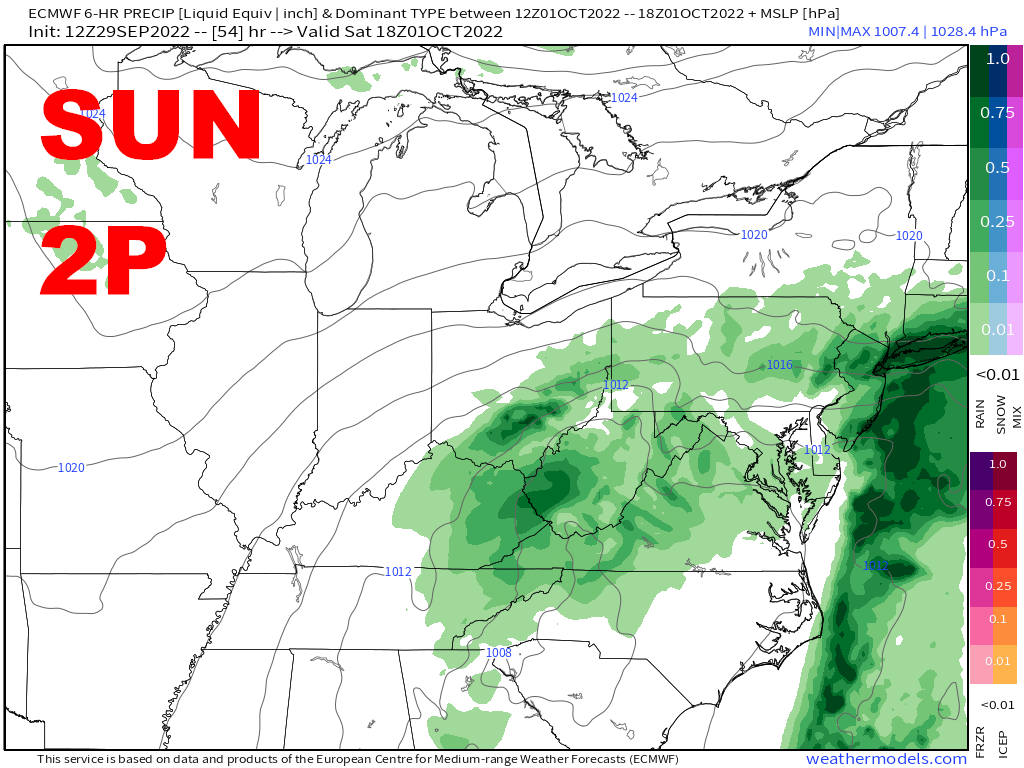 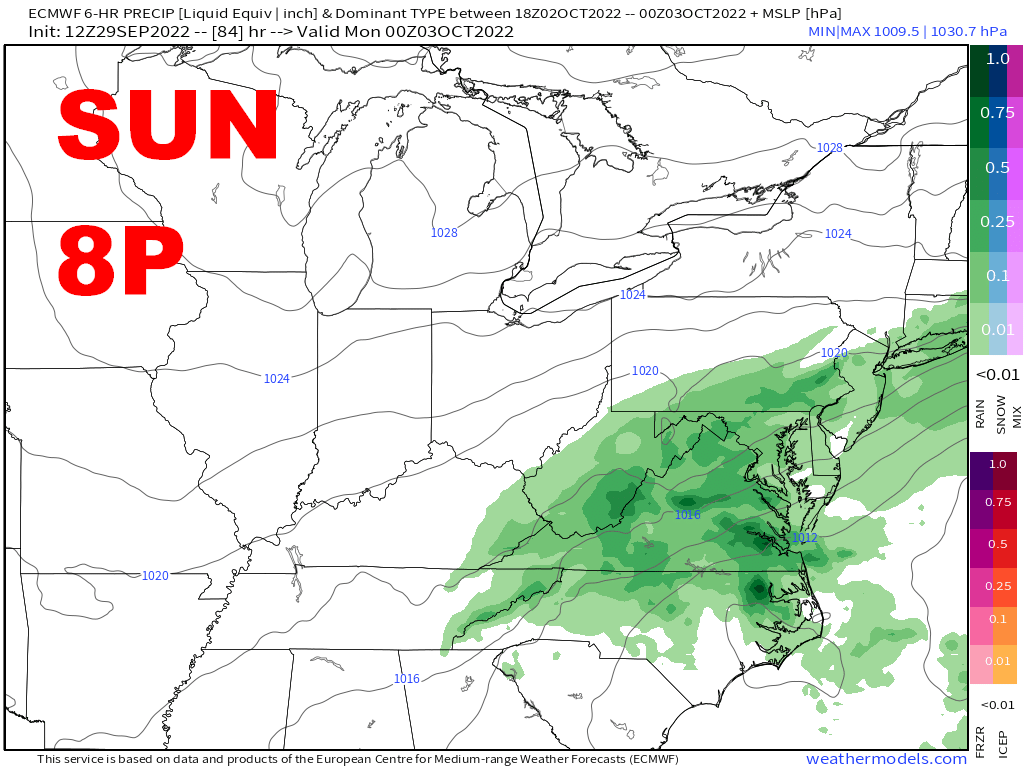 By Monday morning there will be a coastal LOW pressure area just off the Cape Hatteras Coast. The eastern half of Virginia, the Delmarva, southern Maryland, and the eastern half of North Carolina will be overcast with periods of light to moderate rain. The rain and wind will continue in these areas most of the day on Monday. Northeast winds will continue at 15 to 25 mph with gusts up to 30 or 35 on the coastal areas and on the bay during the periods of rain on Monday.

There may still be periods of rain along the North Carolina and Virginia coast and all the Delmarva into Tuesday morning as well as southeast Pennsylvania and New Jersey. Skies will clear across the Mid-Atlantic region from west to east with the least partial Sunshine advancing this far east as Interstate 95 in Virginia and Maryland by 2 or 3 in the afternoon. 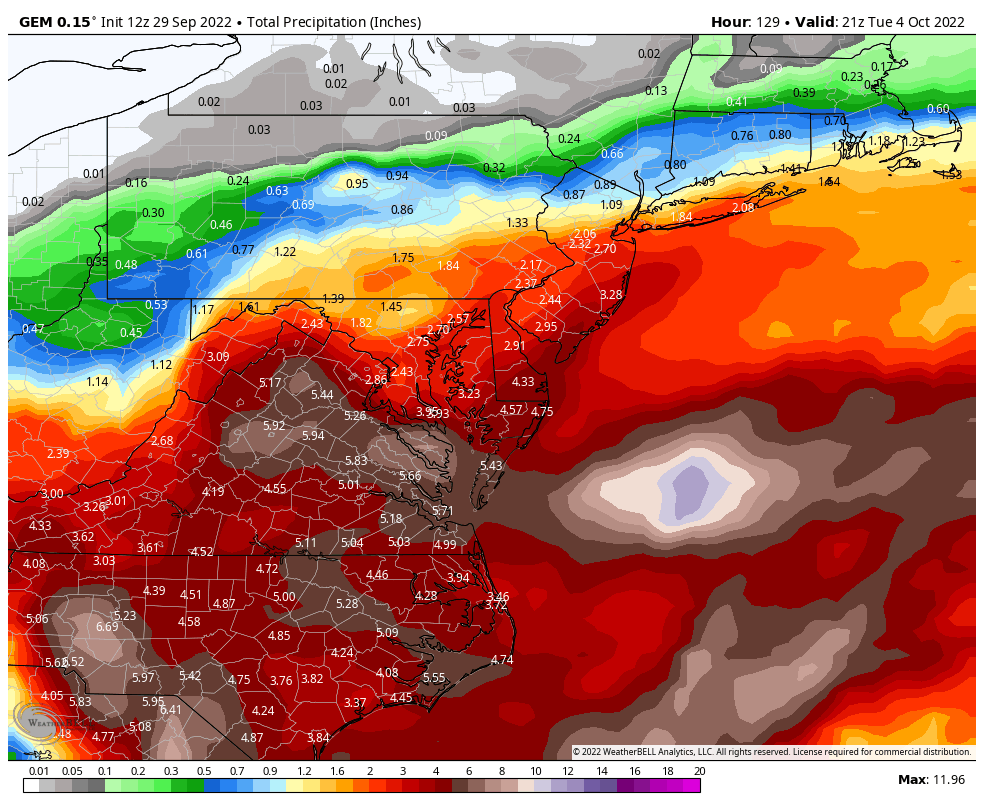 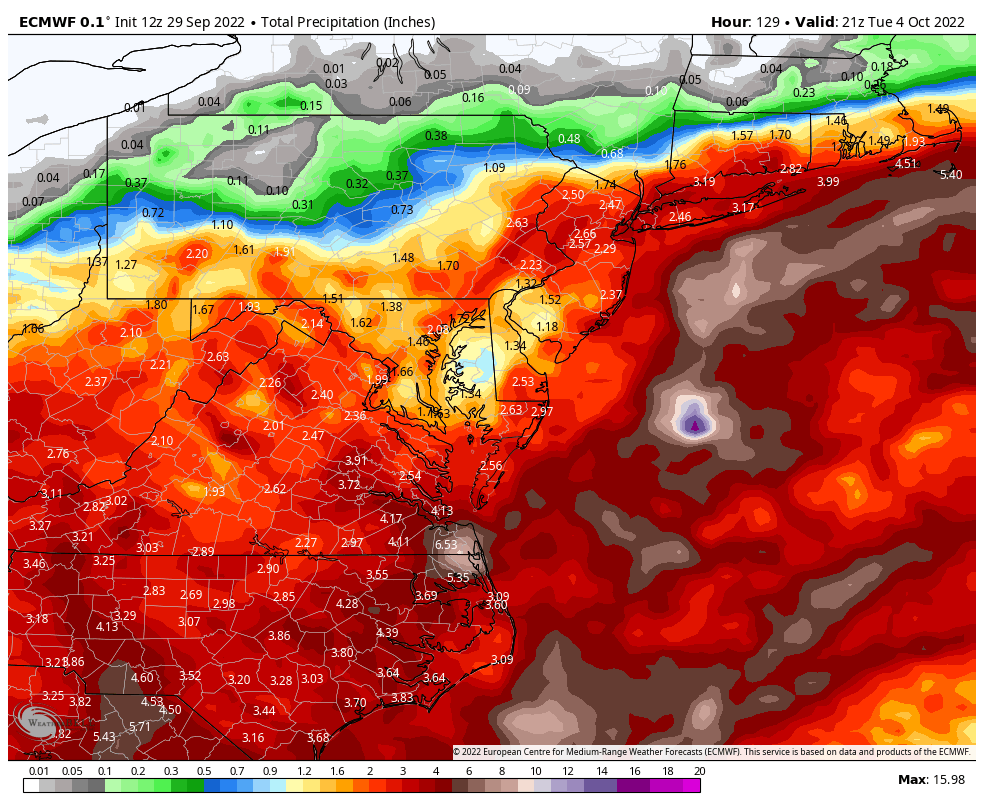